One of our friends decided we should take on the Mt. Tom Challenge instead of our regularly scheduled local trail run. So at the last minute the night before the event we decided that was just what we would do.

The Mt. Tom Challenge consists of going straight up a mountain. Then going around and down the other side. And you do this as many times as you can in two hours. There is no warm up to the incline. You immediately start going up the mountain as soon as the race starts.

You quickly discover that most likely this is nothing like anything you have done before. Well, at least thats what I discovered. The incline is a climb of 1100 feet over a distance of .8 miles. Someone good at math figure out what the angle of that ascent would be. 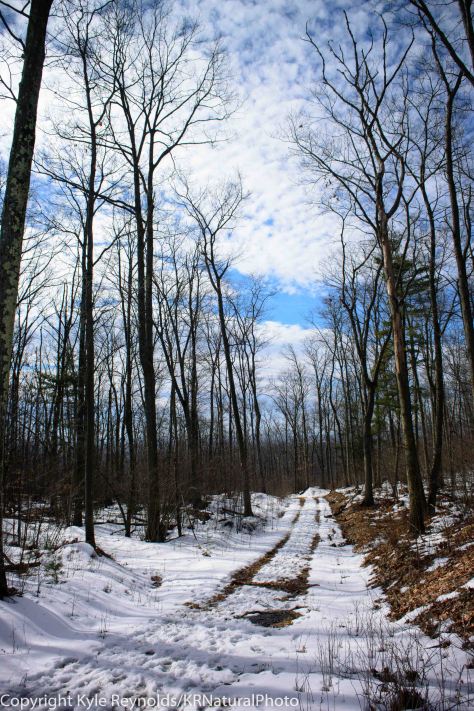 As you leave the flat land you come to this nice depression that was filled with snow. I couldn’t resist stopping to take a photograph here. It was such a nice spot.

The uphill climb was snow-less. Thankfully for me as my trail shoes are virtually bald. I never would have been able to get up a slick snowy slope. On the way down it was a different story. It was muddy in spots and there was varying amounts of snow. The snow could be just a dusting, to half frozen/half melted ice, to ankle deep or more amounts of snow. It was pretty tricky for me picking a route down the mountain and watching my footing. Trying to figure out where I would have the best traction. I was constantly varying my speed and stride to maintain control on the way down. And it almost worked too. At one point on my way down I over stridded and my front foot slide out in front of me and I went down. I basically sat down on my back leg bent right under my butt. I slid down the slop a little on a frozen hard snow that felt more like gravel and cut up my knee a little bit. But I was able to bounce back up and continue running. No real injury, thankfully. As I was getting close to completing my race I stepped in a thick mud hole and lost my show. As I was going downhill I ended up taking about three shoe-less steps downhill in the mud and then I had to walk back through the mud to retrieve it. (Check out my Instagram for that photo.)

When I looked at what the incline was like I was nervous I wouldn’t even be able to complete one lap. So I was very happy with the two laps I was able to complete. I completed my first lap in around 45 minutes and my second lap in about an hour and a half. I could have went for a third lap but I just didn’t have it in me mentally to go back up that hill a third time. Plus I was battling a cold, so that didn’t help. Maybe if I do this event again my goal will be three laps. It was a great but challenging event. Check out the Tyoga Running Club and the Mt. Tom Challenge.